I love JavaScript. I love how it is constantly evolving. The buzz around Vue and how it is similar to Angular has intrigued me, so recently I explored Vue. I wanted to get a sense of how it compared, how it works, and how it feels to develop an app with it. I spent a few days on and off learning parts of Vue to write a small app.

tldr; ... I enjoyed my first experience with Vue. I enjoy Angular. Seeing multiple ways to tackle apps is a good experience.

Along the way, I took notes so I could share my experience. A few things to keep in mind as I share these thoughts over a few posts:

There are a lot of similarities between Vue and Angular that really helped me pick up Vue. In fact, if you look closely you can feel some influence from AngularJS (v1.x) and React, as well. This is a good thing ... the Web is learning from its landscape. We all benefit from this. 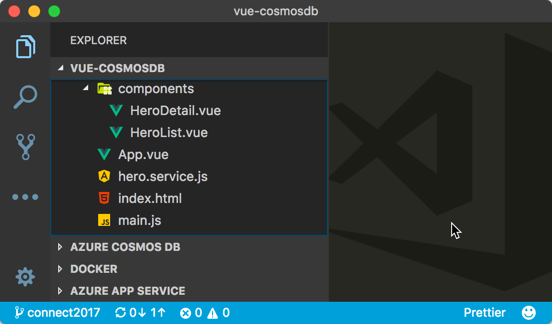 I intentionally designed the apps to follow a similar pattern. The app should show a list of heroes. The list should be retrieved over HTTP. The app must allow retrieving, adding, deleting, and updating of the heroes. The app must also allow some basic styling, a selection from the list of heroes, and save/cancel on the saving of changes. This is a pretty standard formula for most apps.

I used VS Code for building both apps, because ... well .. it's freaking awesome! For best results, grab the Angular Essentials extension and the Vue Snippets extension. They both make VS Code light up even more with Angular and Vue.

Both the Angular and Vue apps also contain files for the index.html and a main.js. Both of these files help kick off their respective apps. 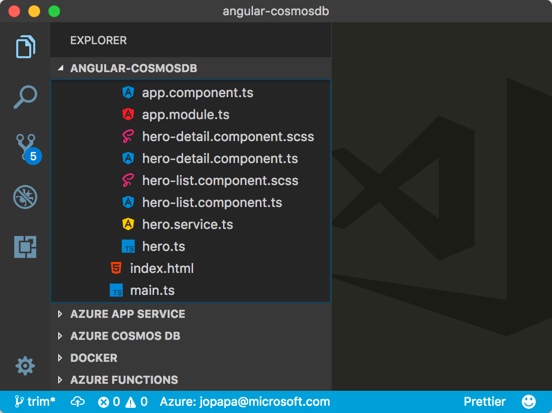 Both apps also have build systems, were generated using their respective CLI tools, and use the same node.js server with a Cosmos DB database (using a MongoDB model). I also configured both to work with docker.

There are some differences in the files in the apps.

What Does it Mean?

Not much. And that's a good thing. They are quite similar in file structure and naming.

The number of files and the file names for these apps are not that important in the grand scheme. They are quite close and relatively easy to map from Angular to Vue to Angular. The takeaway here is that conventions are a good thing, and Vue and Angular both follow some.