TypeScript 0.8.1 was just released and it now supports debugging right inside Visual Studio! You can read more about TypeScript and its latest changes in this post by Luke Hoban, PM of the TypeScript team and you can download TypeScript from here.

TypeScript is a super set of JavaScript and brings optional static typing and other features like classes to the picture.

You can learn more about TypeScript in my upcoming course which I am co-authoring with Dan Wahlin for Plrualsight (coming later this year!). 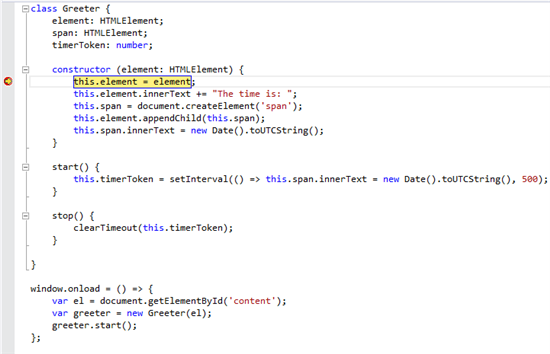 I was having some difficulty getting the debugging to work, so I thought I might share what I found after talking to the TypeScript team (great guys, BTW). There are a few requirements to get debugging to work:

The best news is that the  TypeScript team and the Web Essentials teams mentioned to me that they will try to synch releases moving forward.