The folks at JetBrains have released Resharper 4.0 and made it available for purchase and download on their web site.

The best new feature is the full support for C# 3.0 and LINQ. It has been a long time coming for those working in Visual Studio 2008, but its finally here. If you have not tried using Resharper, you really should. Resharper and DevExpress’s Code Rush / Refactor tools are absolutely awesome. Most developers choose the one they like best and run with it. They make development so much easier, especially when refactoring out issues. Need to find all classes that inherit from a base class?  No problem. Need to find all usages of a variable or control? Easy. Want help in creating code snippets on the fly? These tools both excel in that area.

My favorite feature of Resharper, which by itself is the single most reason I stick with it over  DevExpress’s tools …. is Resharper’s code analysis. At compile time it shows errors and warnings in the open file. You can navigate them using F12 and SHIFT F12, then use ALT-ENTER to see what suggestions Resharper may have for you to fix the issues.

Anyway, I highly recommend looking into these tools.

Here is a neat image during the installation process that shows several of the features in action. 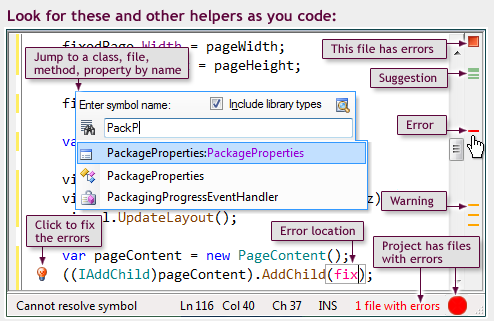