SPA’s are apps too. And as such when creating a SPA you will find yourself writing code to get data, push data, handle validation, change tracking, storing data locally, presenting data, and so much more. All of these roles could be written in a scattered manner across the app, but that causes redundancy, low code re-use and a readability and maintenance headache. And for you pattern folks (like me) it also violates DRY and SRP.

So what do we do? Make more, smaller code files that each handle one specific job.

You can get the details on how I use this approach in my upcoming Pluralsight course titled “Building Single Page Apps (SPA) with HTML5, ASP.NET Web API, Knockout and jQuery”. It’s T-minus 2 weeks before it’s due to be completed … so it’s getting close!

You can catch up on the previous posts in this series here:

Part 8 - Data Services on the Client

Pass 1: Toss the Spaghetti Against the Wall

The first pass of my code is rarely the best or most elegant, but it gets the job done. If I stopped here, I’d leave a code smell behind and have a lot of intermingled code that nobody would enjoy maintaining and would be impossible to test or expand upon.

Then I refine the code for all use cases. This is where I make sure it handles the roles that the code needs to handle. It’s better code, but still has a lot of duplication and ugliness.

Finally, I refactor it to be more maintainable. This is where I optimize the code, shorten it, create extension methods, service classes, and apply DRY and SRP.

Let’s look at an extremely oversimplified and crude example. Below is an example of JavaScript code that displays a message. We could use this code throughout our app to display messages. However it explicitly hard codes the message to display, hard codes the jquery to do it, and if you wanted to change how it works you’d have to search all of your code to find it and replace it. Not very reusable and likely to have typos.

We could wrap this in a function, and that would help. But then what if other files want to use it? Then we need to make sure it is loaded in time. We could put it in its own module, and then it would be more reusable. Then we could make it use a custom message, but maybe a better solution is to tell it how to get the message. For that we could tell it to go talk to a module to get the message.

Again, this is an overly simplified example … but it is easily applicable to larger code issues.

Below is an example of a JavaScript module called alerter. It’s job is to display a message. It doesn’t know what message it will display, because that’s not its job. For that it depend upon jQuery and another module called a dataservice. Notice that the module uses a define statement to identify: 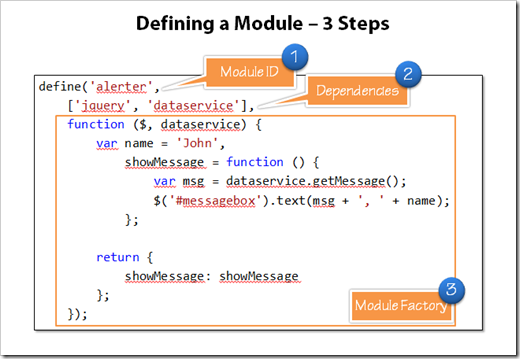 This code has a few advantages our first spaghetti example did not:

In my course I use RequireJS to handle the dependency resolution for my modules. RequireJS helps:

It does much more, too … but the reason I like using RequireJS is that it helps define a structure to the modules in my JavaScript apps that I otherwise would not have.

In my course I go deeper on this concept and show how modularity can make it much easier to manage a SPA as it grows. I include several examples and as a bonus, here is a quick introductory sample using modularity and RequireJS on github that I wrote to help explain it. I call it kis-requirejs-demo for “Keep It Simple RequireJS Demo”

It’s part of a Visual Studio 2012 RTM solution, so you will need that to run it as is. Or you can pull the HTML and JavaScript out yourself and use another tool.