I'll be working on a course for Pluralsight on Visual Studio Code coming soon!

If you want to see the video demo from //Build you can view it here. Visual Studio Code: A Deep Dive on the Redefined Code Editor for OS X, Linux and Windows 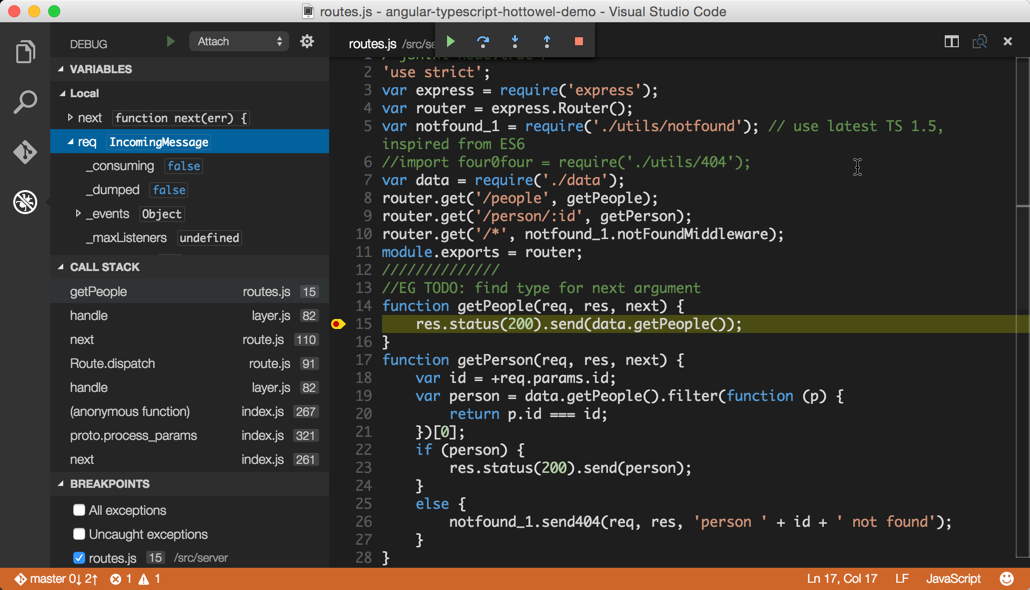 From their download page they describe Visual Studio Code succinctly as:

I like and agree with that statement. They go on to say the following:

More from the docs:

It is a new class of tool, one which combines the speed of today's editors with rich code authoring and debugging, without the complexity that a full IDE can sometimes present to developers. While it focuses on the core edit-compile-debug cycle, it goes beyond those basic editor scenarios by providing helpful code completion, navigation, code understanding, refactoring, diagnostics, and deployment.

Read the docs and see the links below for more details on the prerequisites and how to install and get up and running with VSCode.

Follow this series to learn more about what you can do with Visual Studio Code!

See it in Action

Thursday April 30 Chris Dias, Erich Gamma and I will be presenting Visual Studio Code at //Build. You can check our presentation of Visual Studio Code out at the live stream at the Build web site or a direct link here. For those at Build, it is April 30, 2015 from 3:30PM to 4:30PM Day 2 Hall 1A 3-680.

What's an Editor? an IDE?

Ah, great question. But better questions might be why does this matter to me? Do you need to choose 1 tool? I explored this a bit in this post here about editors and IDEs.

Pretty much the entire direction makes me incredibly productive. I’ve been using early builds for a few weeks and I’m highly productive with it already. Are there bumps? Sure, but the engineering team behind Visual Studio Code have been amazing at course correcting (they use agile iterations) super fast.

These posts outline a ton of features, but I though I’d list my top features that I am enjoying.

What I Miss Most

Extensions … oh those extensions. Missing a feature? Let the community create it. But even better, open the doors to companies to create awesome extensions for VSCode that can improve integration with other tools. This feature would put it over the top. I assume this is coming. In fact, I expect it to be there.

Yes this is just one feature that is missing, but its a huge feature as it opens the doors to tons of other features.

The innovative and creative thinkers at Microsoft have really come through here. I’d be mremiss if I did not mention some of the great people who turned words into action, and made it possible to deliver Visual Studio Code working on OSX, Linux and Windows. Scott Guthrie and Scott Hunter, as the thought leaders behind ASP.NET 5 and it’s much publciized cross platform approach paved the way. Erich Gamma and Chris Dias turned the idea of a cross platform top of the line development into reality.