That bad place must have frozen over. Why? Because I bought a MacBook Pro. Never thought I would do it, but recent events made it actually very viable for me. First, intel based MacBooks make Vista an option. Second, iPhone development requires some sort of Mac OS, which I could have gotten a mini I guess. I plan on creating some iPhone apps, some for fun and some for business, so the Mac made a lot of sense here. Third, VMWare's Fusion product makes is possible to take a virtual machine image of Vista (or XP or several other OS's) and use them on a Mac. Fusion is what made me think that I could try using the MacBook for .NET development. yes, I could use Bootcamp to have dual boots on the Mac and another options is to wipe Leopard from the Mac and install a fresh Vista OS, but I wanted to keep Leopard around. I am pretty curious about the OS and I do need it for the iPhone development.

So Fusion came to the forefront. I looked into it and found that they have a feature called Unity which allows you run the Vista applications in congruence with the Mac OS. Its interesting ... basically it becomes a windowless virtual machine where I am running Leopard with some of its apps and the virtual machine for my Vista instance is running as well. So I can have Leopard apps and my apps running side by side (not within a VM window). For example, right now I am running Windows Live Writer in my virtual machine and FireFox in my Mac side by side.

Fusion has several features which I am evaluating and I will be blogging about. There is also a new beta for Fusion v2 beta 2 that just came out. I will be looking at the beta too, but for now I am only running Fusion v1.

VMWare's Converter program is another great tool as it allowed me to grab an image of my laptop and make a VM image from it. So I am running an image of my Thinkpad laptop on my MacBook Pro. Pretty cool indeed! Thought it did take 4 hours to create the image (gulp).

I'll post more as things unfold, but for now its looking very promising. Fusion is fast as heck and Vista is development is super fast running under it. I do notice a few issues that are annoying including some weird phantom windows that appear when I use a VM in Fusion. Once I get some more mileage under my belt with this I will post about these and discuss some options.

And the MacBook pro? My only gripe so far is the damned keyboard translation. I love a lot about this laptop. But going to the next word, previous word, HOME, END, and other keyboard shortcuts don't always work properly, and it gets worse under Fusion. This is a major headache so far and I hope its just a learning curve for me. For example, I hit <CMD> + <LEFT ARROW> and it should go to the previous word's first letter. It works sometimes but other times it keeps going back to about 20 previous words. Like I held the keys down. Ugh. I need keyboard navigation so I have to figure this out.

This is a full screen image of my Visa VM running on my MacBook pro under VMWare's Fusion using the Unity feature. (Click on it to see the larger image). Notice the Leopard dock on the left and VMWare Fusion on the top while Windows Live Writer is running ... all in Unity. 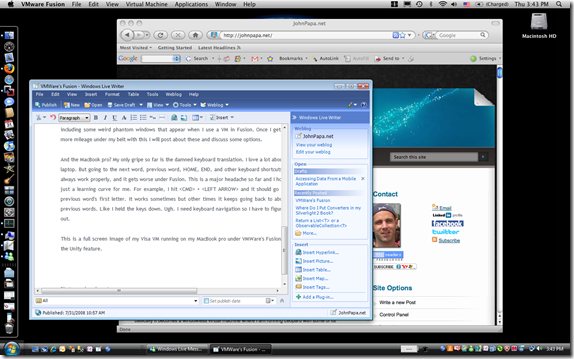