I’m excited that I just received an Intel Haswell Ultrabook to review! Last year I reviewed an Intel Ivy Bridge Ultrabook with Windows 8 and touch screen. Overall I was happy with the device, the hardware, and sensors. Battery life was so-so, but then again, it was about the same as most other machines so no big expectations there anyway. But this is a new year and the Intel Haswell chip has set some pretty big expectations. 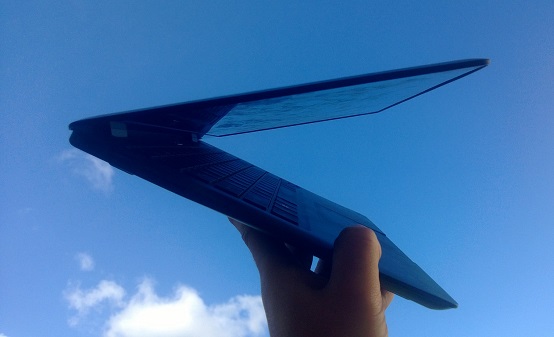 The folks at Intel recently sent me a Haswell based Ultrabook to examine and provide feedback. They made it clear, in about every way imaginable other than a personal visit, that this is a model that will never be a production laptop “as-is”. It is branded as Intel for the purpose of reviewing and testing. Yet the parts are true Intel parts and these are what we’ll see in models very soon.

In this post I’ll be giving my impressions of the unboxing experience. I’ll follow up with a few more posts on how it performs after I have more time to put it through some real power use for extended periods.

I’ve said it before and I’ll say it again: I love lightweight, powerful, and fast computers. Lately we haven’t had to make as many sacrifices to get these types of laptops. In the past this meant giving up battery life, screen resolution, dongle craziness, noise reduction, speed, or other features. In my early usage, this Intel Haswell Ultrabook I received gives up very little and gives back so much.

The Ultrabook came with the a power block and cord, a 16GB USB stick loaded with drivers, 3 dongles (HDMI, VGA, Ethernet), and of course the Ultrabook itself. The packaging was neat … my kids loved it … when they opened the box with me it played the Intel jingle. So of course it took me about 10 minutes to actually unbox it because they kept opening and closing the box to hear the jingle.

When I sat down to write the specs for this Ultrabook I had to go look. That is significant because the Ultrabook performs very well and I would have guessed i7 with 8gb RAM and SSD. I was wrong. The Ultrabook is sleek and thin combined with an i5 1.40Ghz processor, 4GB RAM, and a 180GB SSD drive. I was concerned about speed since I normally prefer 8gb RAM and an i7, but so far this Ultrabook has not disappointed me at all in my early tests. Of course it has all the standard ports and then some (USB 3, Bluetooth, WiFi, SD card slot, and more) and it has 3 dongles for other adapters as I previously mentioned. I’m not a fan of dongles as I usually lose them, but its a minor nit.

The keyboard is very good, which surprised me since this is not an Intel thing. Remember that this Ultrabook is a reviewer model and pretty much everything is their brand for things they make (GPU, CPU, sensors, etc). Intel doesn’t make keyboards or cases, so I was surprised at how much I liked the keyboard. The touchpad is average … most of the time I use a mouse if possible, I’ve never used a great touchpad though.

The screen looks really sharp and the colors are excellent. On par with my Surface pro! Of course this is a touch screen which is critical for a Windows 8 computer. The touch points performed very well, with no issues.

I tried out several Windows 8 store apps including some games like Toy Story Smash It, Royal Revolt, and Temple Run Brave. These looked and performed great especially with the touch, accelerometer, and gestures! In fact, my kids didn’t want to give the Ultrabook back to me after I let them try it. I also tried out several apps that used touch, location, and other sensors. Everything worked very well, which was as you would expect. (You can learn more about these available sensors here). 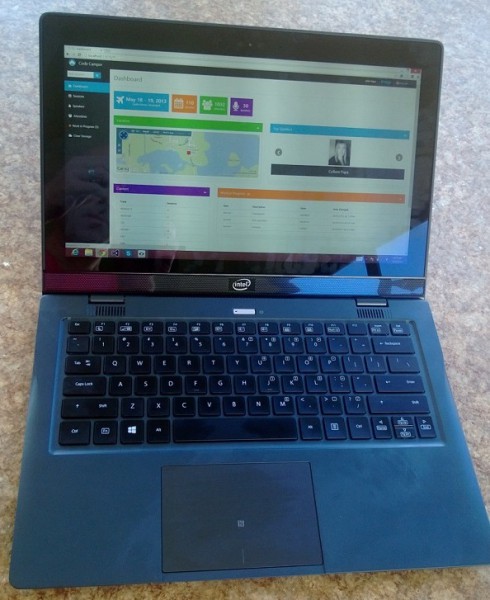 In my early tests, from a powered off state I managed to boot and get to the login screen in just a few seconds. I loaded Visual Studio 2013 Preview and I worked on my next Angular and Breeze Single Page Apps project on this Intel Haswell Ultrabook for 5.5 hours straight on battery. When I stopped, the battery indicator said I had about 1.5 hours remaining. I was very impressed as I was using it heavily for the entire 5.5 hours. I’ve never had a Ultrabook that was a comfortable enough size, good screen, fast enough, and long enough battery life to sit nowhere near a plug. Usually I can get all of that but I need to stay plugged in.

I’ve now worked 2 days on this Intel Haswell Ultrabook and both days I have had similar experiences of about 6.5 to 7 hours of battery life before I had to plug in. While it is not the 12 hours that we hear sometimes, I never really believed that anyway since I hammer on the laptop non stop when I use it. 6.5 to 7 hours is double what I had before, so I’m looking forward to this!

It’s only been 2 days but I’ll be trying this is my regular laptop over the next few weeks so I’ll report back on how it all goes.

Disclosure of Material Connection: I received one or more of the products or services mentioned above for free in the hope that I would mention it on my blog. Regardless, I only recommend products or services I use personally and believe my readers will enjoy. I am disclosing this in accordance with the Federal Trade Commission’s 16 CFR, Part 255: “Guides Concerning the Use of Endorsements and Testimonials in Advertising.”