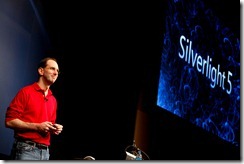 Silverlight 5, announced at the Silverlight Firestarter this past Thursday, introduces many new features including several that focus on premium media experiences and business application development.

You can watch Scott Guthrie’s keynote here if you missed it, or if you want to see it again.

In addition to this quick list of features we disclosed for Silverlight 5, I’m working on some posts to elaborate on the Silverlight 5 demos that you saw in the keynote, some behind the scenes looks, and some great photos from the event. We spent much of the past 5 months working up to this event from what started as a (very messy) diagram on my whiteboard … most of which is still up there. We built a team from many parts of the company to handle the aspects of the event and on Dec 2 we delivered what became the Silverlight Firestarter 2010. I had the honor of playing many roles in the event and I am blown away by the overwhelming support we received inside and outside of Microsoft.

But this post is all about the features, so let’s first start with the features we announced: