The “best of the best in Angular” will gather later this week in Salt Lake City, Utah for ngConf, according to their web site. 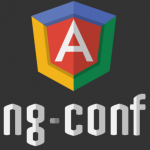 I’m honored to be included as one of the speakers at this all Angular event, along with my good friends Dan Wahlin and Ward Bell. The event is Thursday and Friday, both of which I hear will be live streamed! This is pretty exciting as the speaker lineup contains some of the most well-known Angular leaders including many from Google Angular team.

To watch the live stream on Jan 16 and 17 I am told you should go to the ngConf web site on Thursday.

Check the schedule for the lineup. Most sessions are shorter than normal, which I love. This way they can pack more information in and there is less time for rambling. I’m a huge believer that you do not need an hour+ to get a point across, so my 20 minute session will be very focused

So what am I presenting? I thought about several ideas including structuring my projects, patterns I use, validation logic, but I really wanted to show something that folks might not have seen before. So I settled on showing a cool saving strategy that really plays into a user’s workflow well using Work in Progress (aka WIP). I’ll be presenting to an Indiana Jones themed presentation, whips and all.

Quite often we force users to save or cancel data, before moving on when what they really want is to leave the page in a changed state and come back to their work in progress later, perhaps after closing the browser. This requires change tracking, local storage, serializing and rehydrating complex object graphs, not to mention visual indicators to improve the user experience. Come learn how when AngularJS meets BreezeJS we can light up this scenario.

Other Sessions I'm Excited For

Dan Wahlin will be presenting a rapid fire version of his getting started session now aptly named Angular in 20-ish minutes. Igor and Brad of the Angular team will be splitting the keynote, which should be awesome. The Google Doubleclick team will be showing how they tackle a large-scale Angular based app. And there is so much more.

This is a new event, but one I think is very timely and I’m excited to be a small part of it!